United Airlines and American Airlines began selling basic economy fares this week on select routes. Initially, United will offer the fare—which limits carry-ons to personal items that fit under the seat and does not allow advance seat selection—for travel between Minneapolis/St. Paul and any of United’s seven U.S. hubs (Chicago O’Hare, Denver, Houston Intercontinental, Los Angeles, Newark, San Francisco and Washington Dulles). The first flights to offer the fare will begin April 18. United then plans to expand basic economy to the rest of the United States, the Caribbean and short-haul Latin America.

Basic economy passengers on both carriers cannot change or cancel flights, and they are not eligible for upgrades. They will board in the last group, unless they have high-level frequent- flyer status with the carrier. Passengers with status also may store a full-sized carry-on in the overhead bins. American will allow passengers to select a specific seat for a fee.

United cautioned that groups and families using the basic fare will not be able to sit together. Both carriers noted that basic economy passengers will be extended all other amenities to which economy passengers are entitled, such as use of inflight entertainment and the ability to purchase WiFi or food. (Travel Market Report)

Below is a chart detailing the differences in the Basic Economy products: 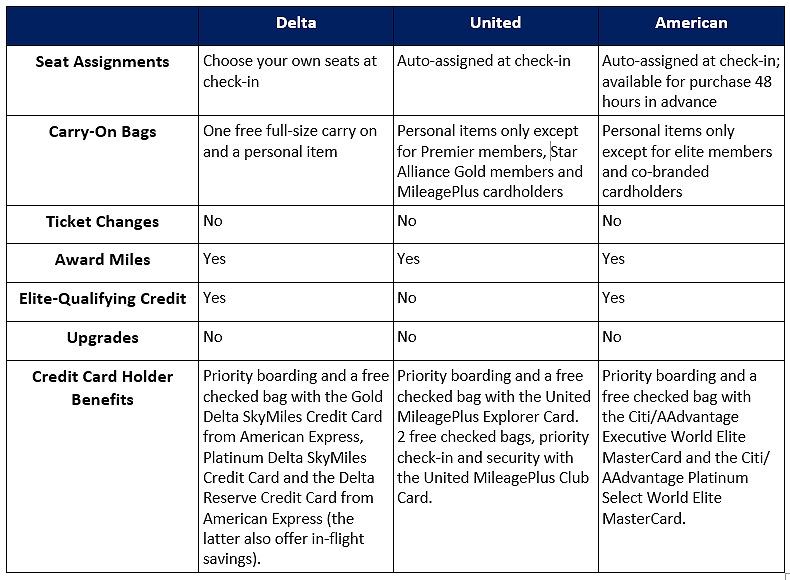